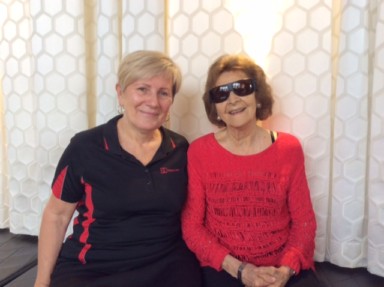 You could say eighty-eight year old Wieslawa Grajczonek knows Diversicare like the back of her hand.  Having previously worked and volunteered for Diversicare, she has come full circle and is now a Diversicare client, 21 years after retiring from the organisation.

Originally from Poland, she was a child movie star staring in several Polish movies before WW2.  One was called the Lieutenant’s Daughter where she played a four year old child and all these years later you can still find footage of her movies on YouTube.

Wiesia has a long and rich history. At the age of 13 she and her mother laboured in a German concentration camp picking stones out of fields to grow vegetables.  After the war Wiesia and her mother were reunited with Wiesia’s brother Artur in a displaced persons camp and where she also met her future husband, Stanislaw.

Stanislaw and Wiesia married in 1948 and in 1951 with one child Regina, and heavily pregnant with her second child Richard , they left Europe to to make a life in Australia.  Once settled in Brisbane, the couple went on to have another child George.

In 1991 she starting working as well as volunteering with Diversicare as an Assistant to the Polish Coordinator Frank Routyna and then Wieslawa Drozdz working with Polish clients and coordinating respite activities.  Wiesia retired from Diversicare in 2012 when acute blindness forced her to stop working.

Wiesia starting receiving services from Diversicare in 2015 for domestic assistance as a CHSP client.    When her coordinator Beata noticing that Wiesia’s health had deteriorated further and she required a higher level of care, Wiesia was approved for a Level 3 home care package.   Wiesia now receives domestic assistance once a week and weekly culturally appropriate one-on-one social support from her home care worker Goshia, who speaks Polish.  Goshia takes Wiesia shopping, to medical appointments  and to the local library where they actively seek out audiobooks for Wiesia to listen to.

Wiesia also attends Polish respite at West End CONNECT twice a month which she thoroughly enjoys. Wiesia is looking forward to Christmas and her family comes together at her home with her 3 children, 8 Grandchildren and 8 Great Grandchildren.

Diversicare home care worker Goshia says Wiesia is great company to keep to keep.  “She is always looking forward and for someone who has been through so much, has a wonderfully positive attitude.”

Diversicare is a division of: